We had lost a couple of weeks of cycling from waiting for visas back in Turkey and realised we needed to make up distance if we were to enter Uzbekistan and Tajikistan when our visas started. This meant we had to skip cycling in the Azerbaijan countryside and take an overnight sleeper train directly to the capital city of Baku.

I didn’t know what to expect from the city but was delightfully surprised by how modern it appeared, it truly felt like a mini dubai. The biggest brand stores and car dealerships lined the marbled street paths, massive glass walled hotels springing up left, right and centre. It was really quite impressive. 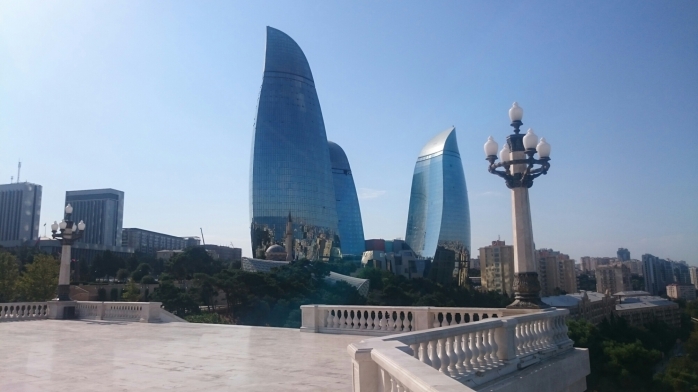 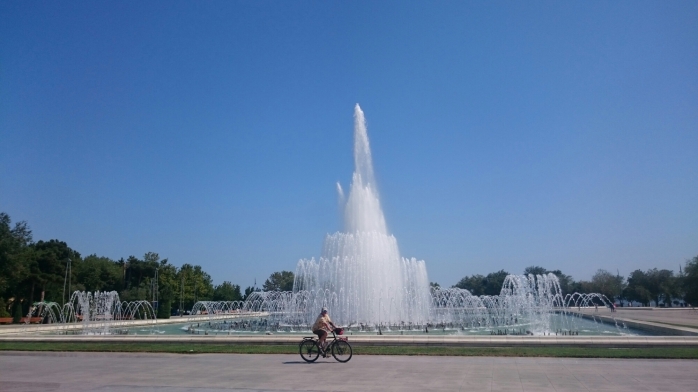 We tried to catch a ferry across the Caspian sea to the city of Aktau in Kazakhstan, however the system is a complete farce, with no official ticket office you must either bribe a port guard or phone a lady who may sell you a ticket. In such a modern city it felt ridiculous running around guessing how to get across.
We quickly gave up this option and chose to fly by plane instead.
This meant dismantling the bikes and reassembling on the other side.

We decided to meet in Aktau and travel together for a couple of days.
Here we are after arriving in Kazakhstan building up our bikes at midnight. 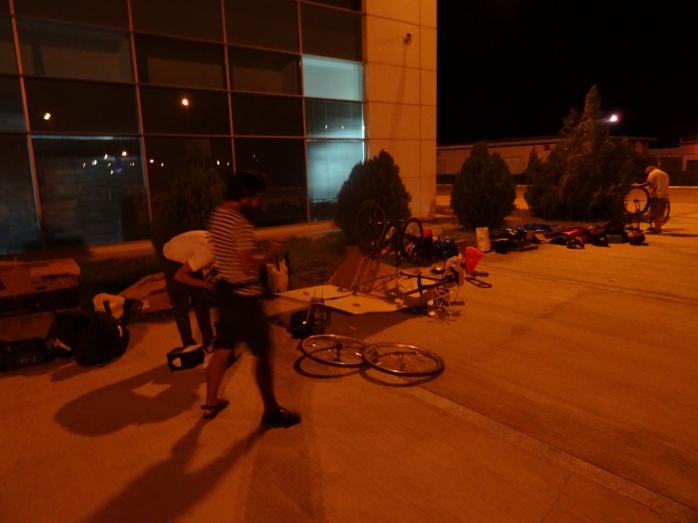 We camped up at 1am a few kilometres from the airport.

The next step was a 20 mile ride to the train station, where we hoped to get another sleeper train to Beyneu, 50 miles from the Uzbekistan border. On the way we encountered Camels crossing our path.

Outside the local bank to withdraw some money for the train and supplies. 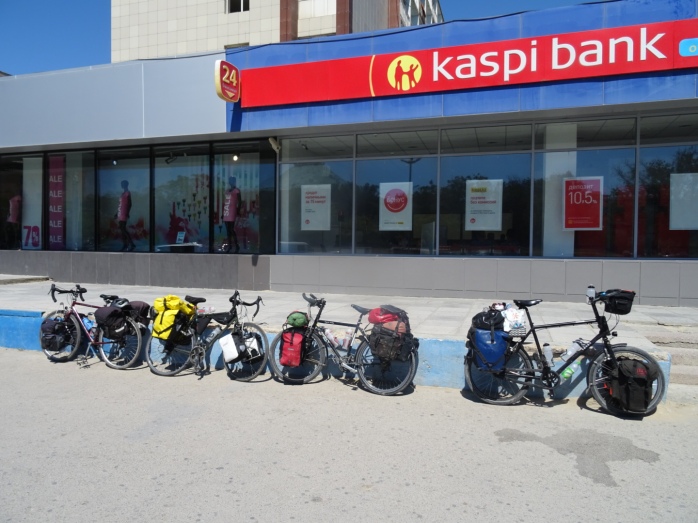 We reached the train station just in time and rushed to bundle our bikes on to the train. We then relaxed for the 7 hour journey.

We arrived at our destination a bit worse for wear at 3am, here we had a quick beer before setting off in the night sky.

We stopped by the roadside at sunrise and brewed up some coffee, as the caffeine kicked in we soon realised we had some possessions missing, as we had little time to check in commotion of leaving the train so early and tired. 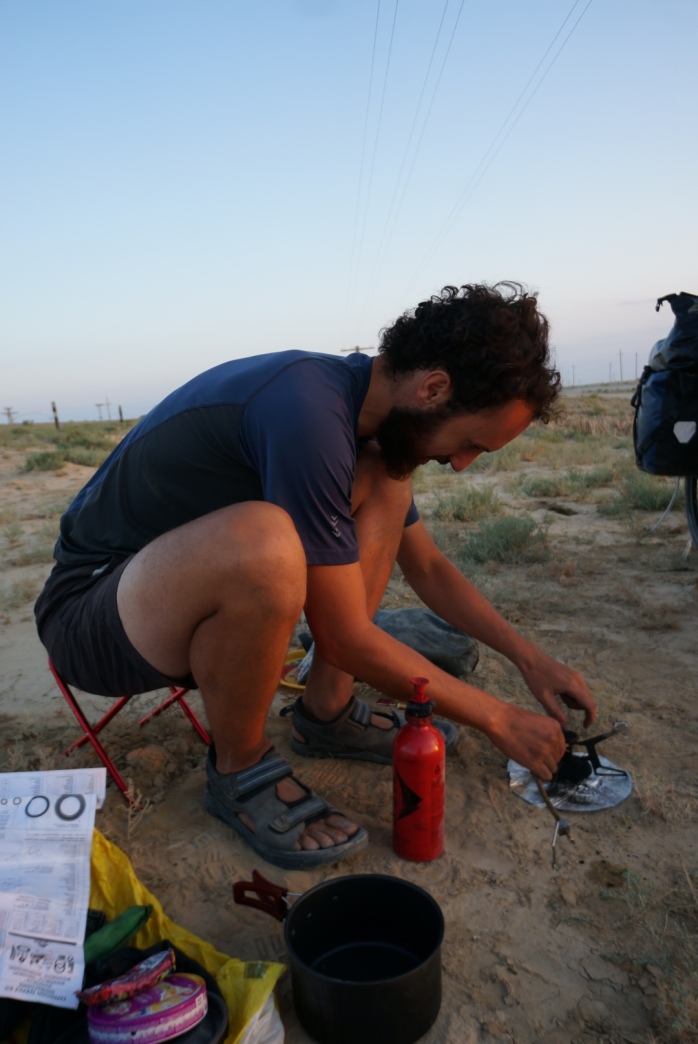 As our belongings had all been in our panniers we could only come to the conclusion of theft whilst we slept.
Tivo and Sam had their lights and multi-tools taken, Barry had his multi-tool missing too and my solar panel and toiletries had disappeared. Such a bad start to our central Asia adventure.
After a few curse words we plowed on towards to Uzbek border. 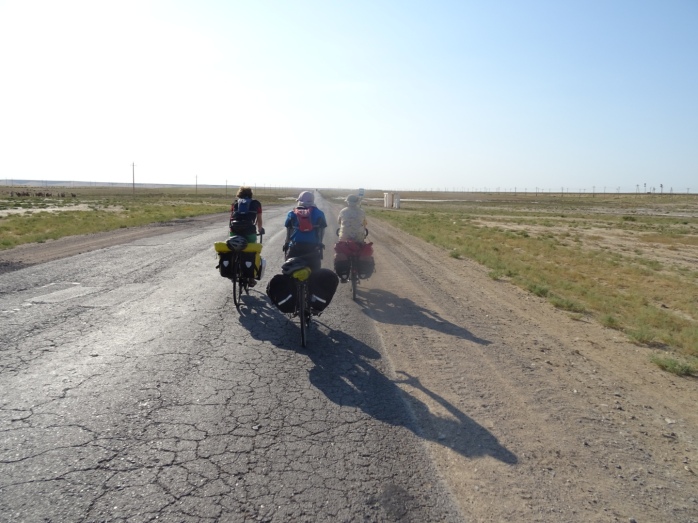 At the border we were greeted with smiles and given special priority, we breezed through passport control and baggage search and into the country within an hour.
We stopped for tea and noodles at a cafe 10km into the country

That night we star gazed for hours. With no light pollution the milky way shone down like I’ve never experienced. Truely fantastic views. 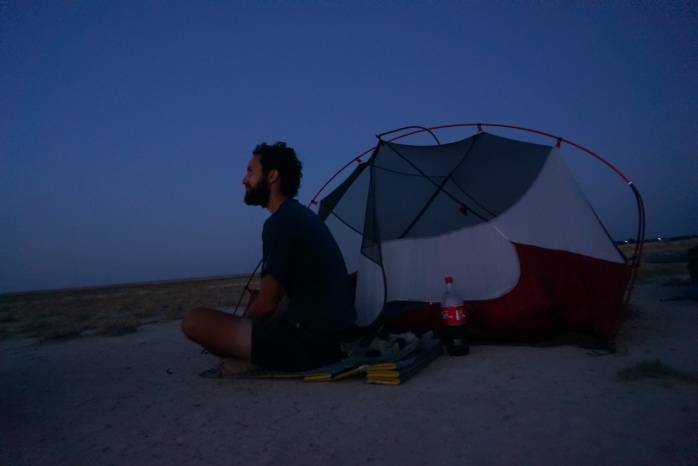 The next morning Sam and Tivo caught another train to the next big city as their bikes had suffered damage on the short ride to the border. Barry and I were determined to cycle the entire countries length through the deserts.

The roads were flat and endless, small bends appeared every 60-70miles. 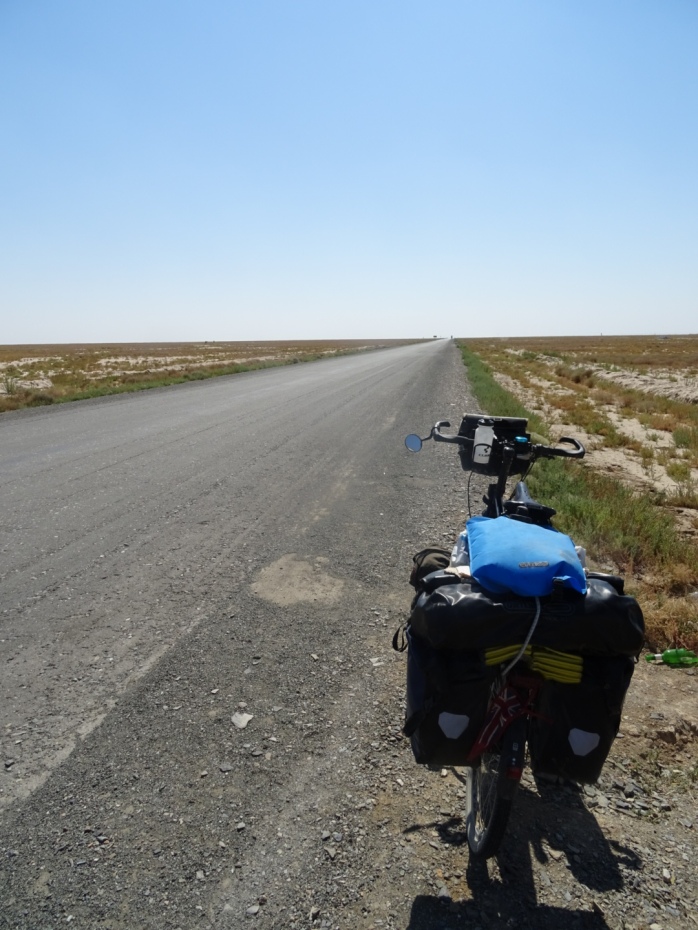 The only change in scenery would be the appearance of horses or camels.

Riding through the desert during August was always going to be hot. But neither of us thought it would hit 58 degrees Celsius!

It was essential to find shelter between the hours of 1-5pm, our only option this day was inside a road drain.

A road sign gave us 10 minutes of relief too. 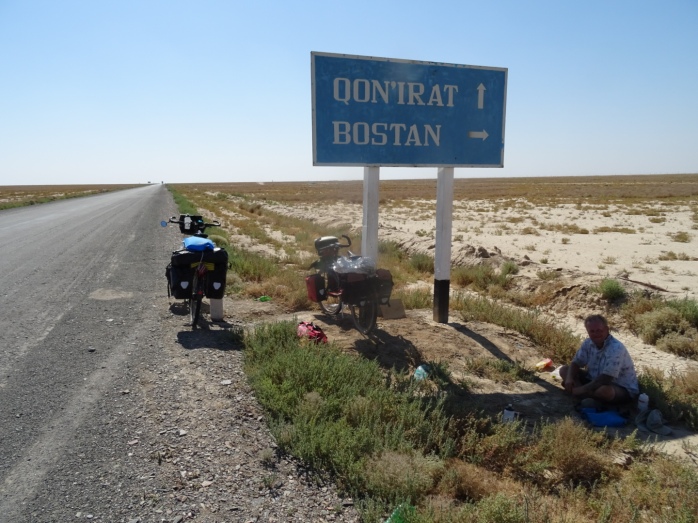 Motorists are very kind, waving and beeping along the way. These gentlemen stopped for some photos with us.

Riding through the sunset…. 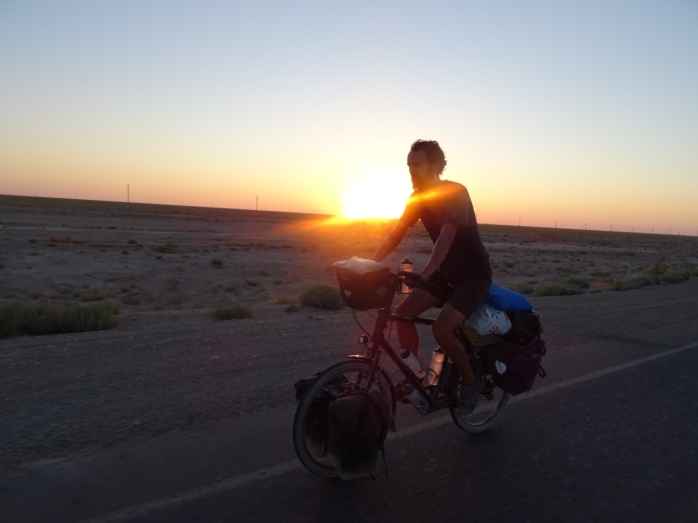 There was no bugs or insects in this particular desert. So we slept without our tents one night. Again the stars providing an incredible light show.

The Aral sea has all but gone from this area, boats lay stranded in the remaining salt flats.

After a grueling 7 day ride through the northern desets we arrived at the town of Khiva. We rested here for 3 nights. 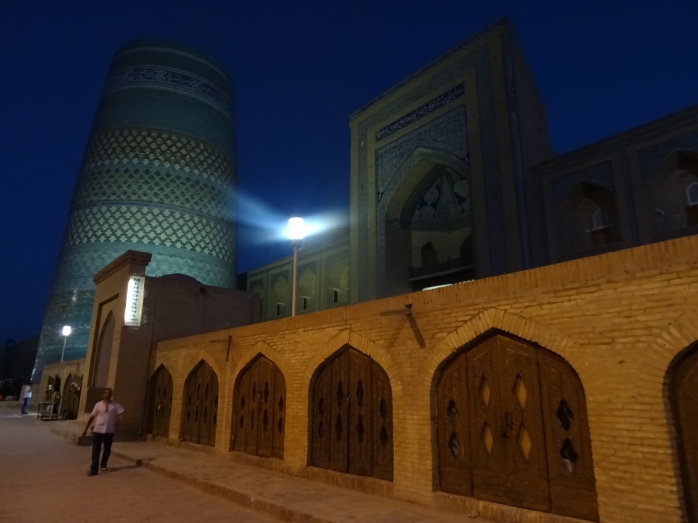 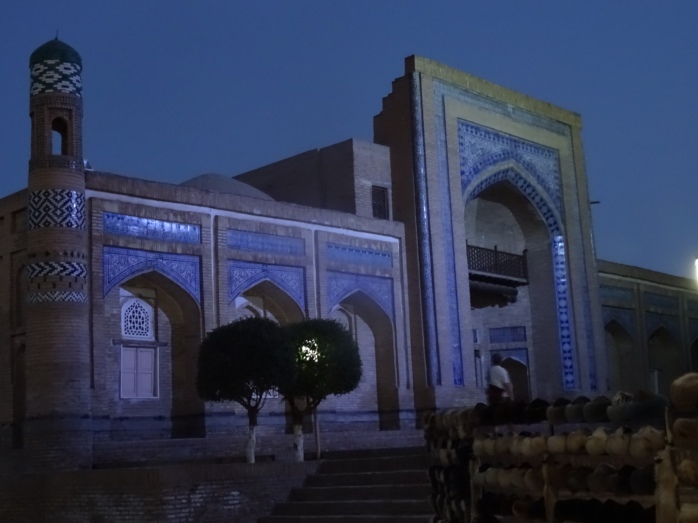 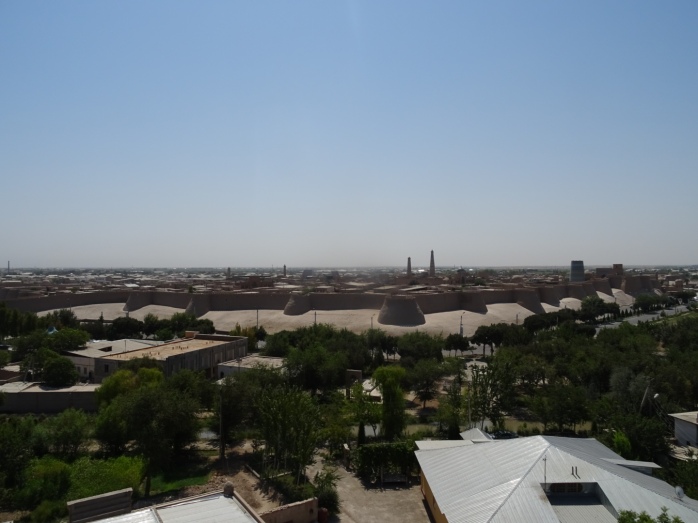 In the town we met a young cycle touring couple from California, USA. We had a drink together and decided to ride as a quartet for the next 4 day desert dash to the city of Bukhara. 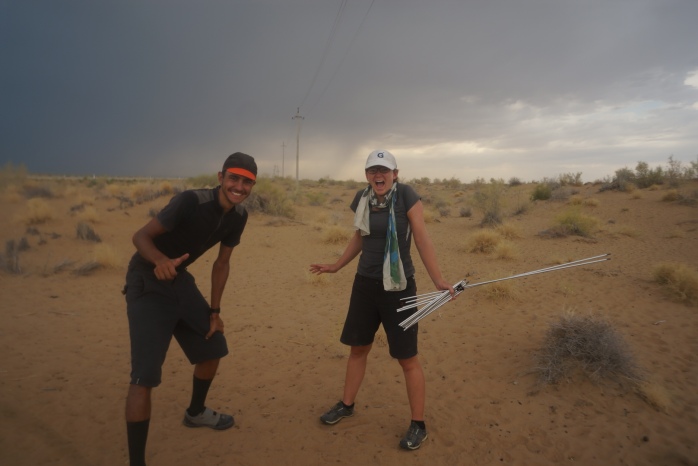 Our first night wild camping together.

One afternoon Didier spotted a storm approaching behind us. We waited in anticipation for what we thought would be the first rain shower in nearly 2 months.

How wrong we were!!! It was a sandstorm!! A massive sheer cloud-high 40mph wall of sand battered us from behind and sent us screaming along the road.

My initial fear turned to elation when we were being pushed along at a steady 30mph. 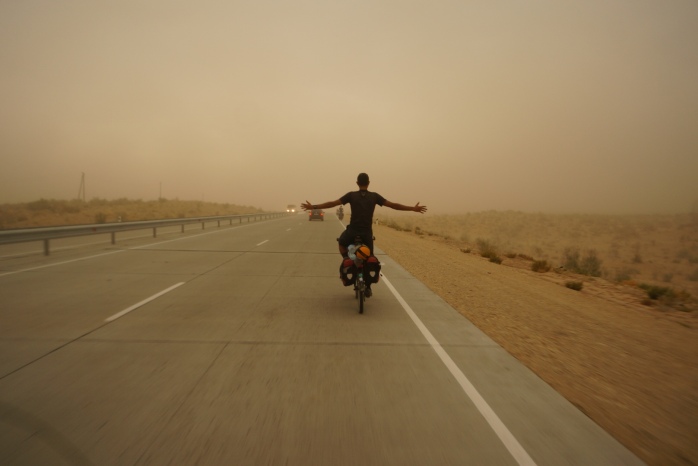 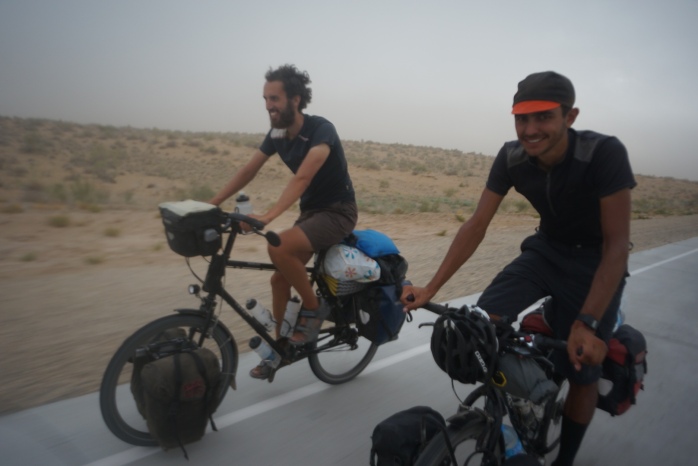 Our desert dash lasted 4 days and we eventually made it to Bukhara. We stayed here for 2 nights at a backpacking hostel. 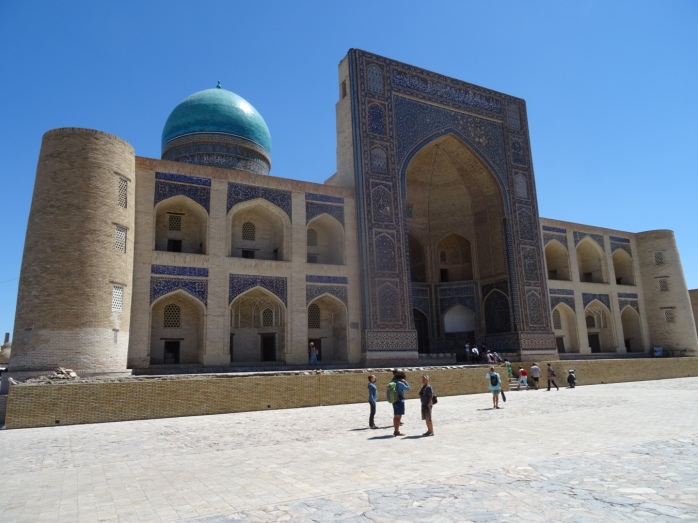 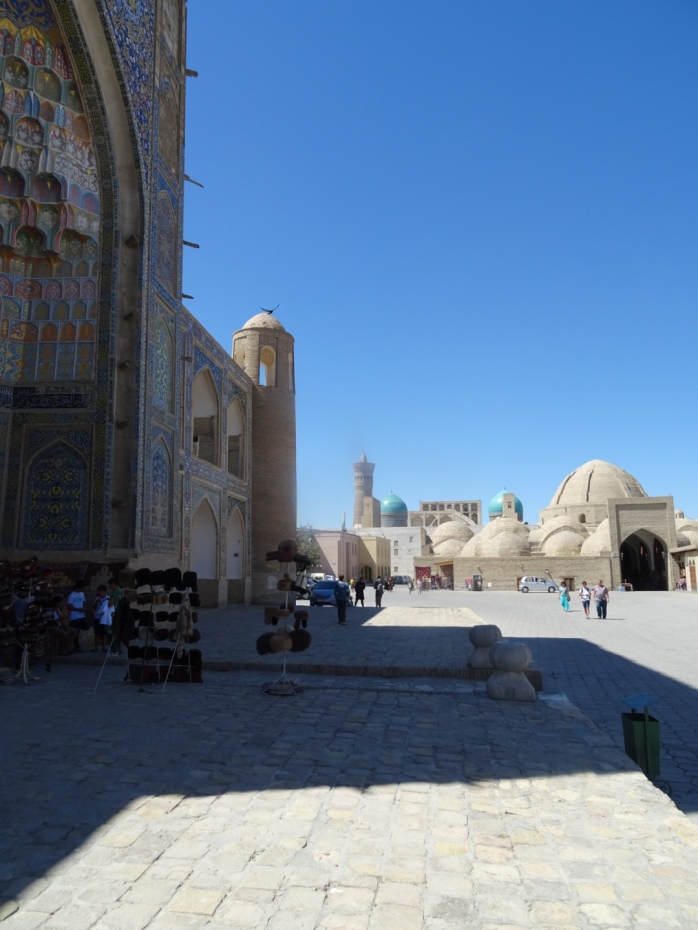 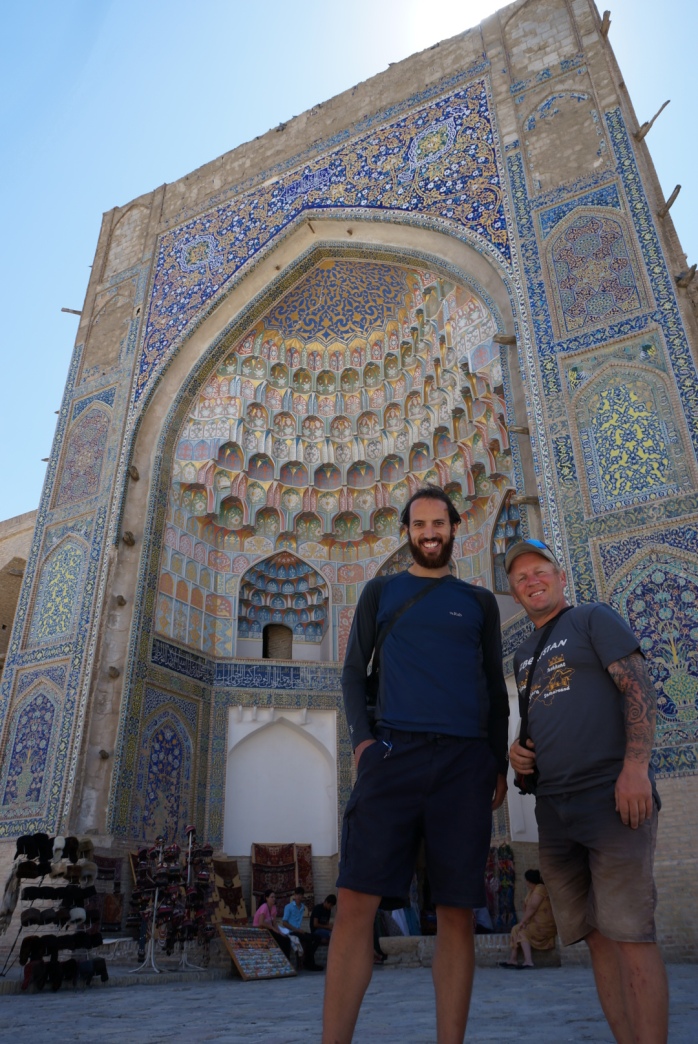 It was here we met 3 other cycle tourers. A couple from Germany and a Swiss man. We all teamed up for a 3 day, 300km ride to the city of Samarkand.

Riding as a group of 7 was a lot of fun! 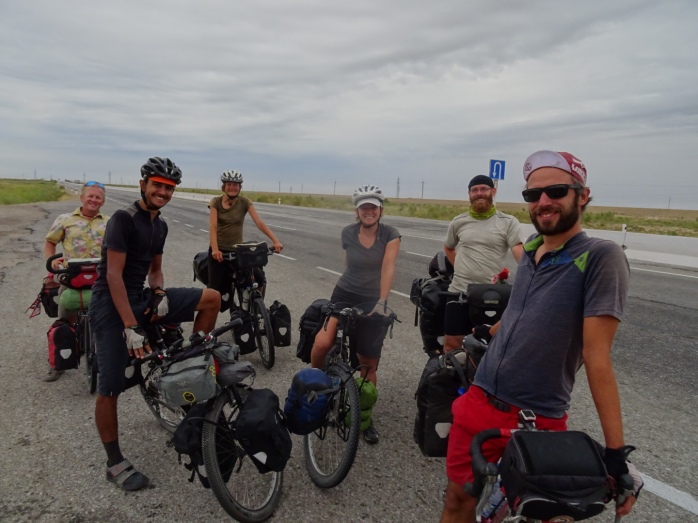 Wild camping in large numbers was tricky so we asked in small villages to camp in their gardens. We were welcomed with open arms. 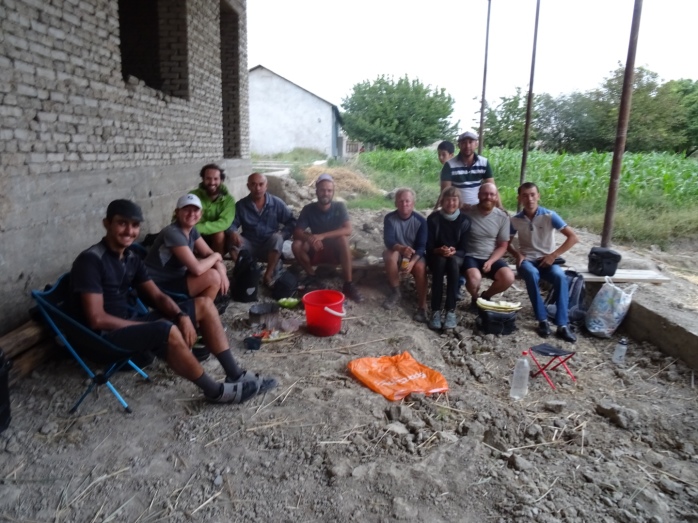 The weather cooled down to a pleasant 27 degrees.

On our second night we were again hosted by a family in a spare room (above).
However our presence attracted a lot of attention.
By 9pm a large crowd had gathered watching us unpack.
The police then arrived. After checking our documents they explained we could not stay and we were all escorted to the local police station.
In the holding room we were told “for our safety” transport had be arranged for us to be taken to the next city, our destination of Samarkand. A truck for our bikes and mini bus arrived to take us away.
The police were very friendly throughout the process.
We were dumped by a hotel and then left. It was nearly midnight now and we were shattered.
I was happy we were safe but annoyed we didn’t get to cycle the entire length of the country.

Samarkand was a nice city and we were hoping to see a music festival. However apparently it was just for the president and his huge entourage so couldn’t get anywhere near it or the main attractions due to security. He are a few token photos I managed to snap.

We then continued on our way to the Tajikistan border. 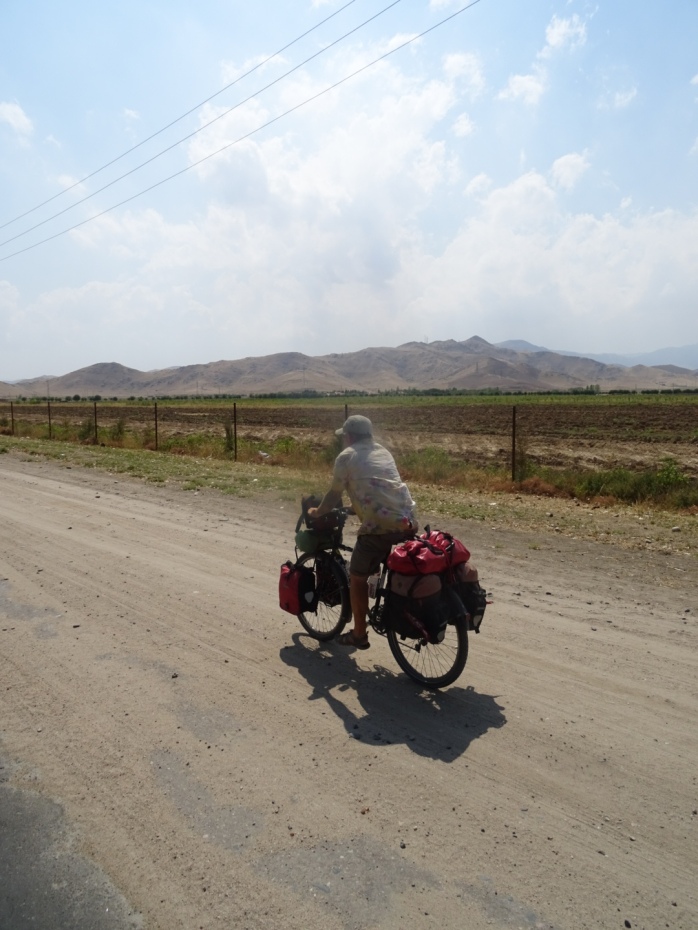 We hit some large hills on the way but the views more than made up for them. 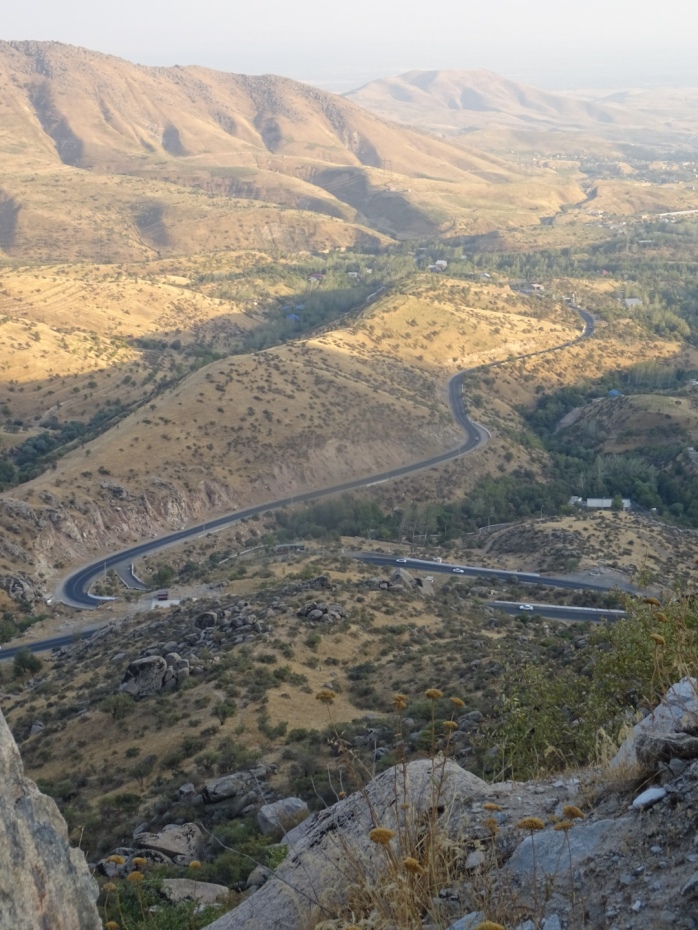 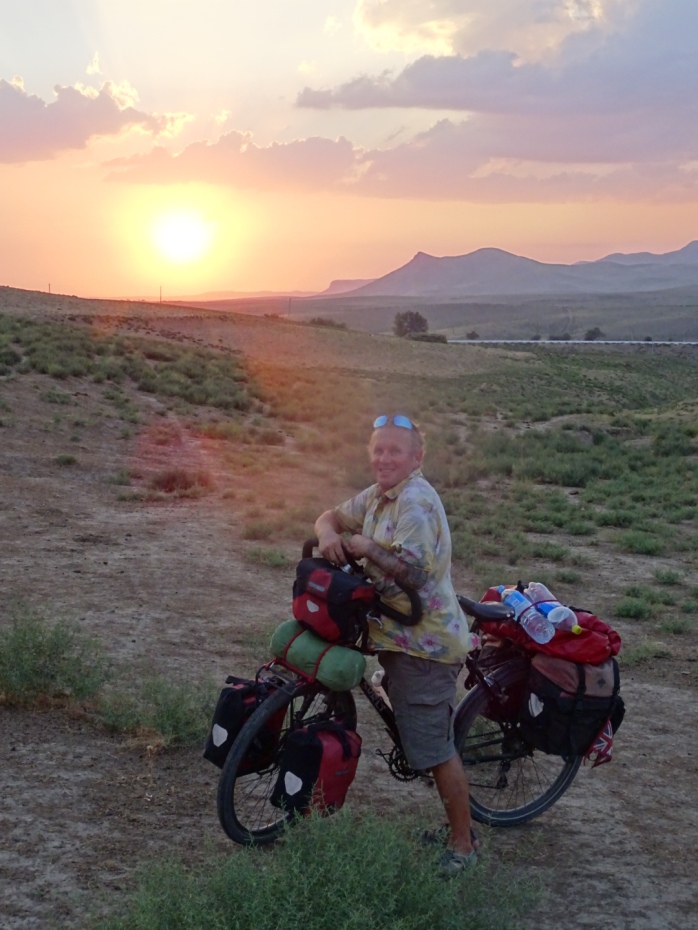 Sunset at our wild camp spot!

We then entered Tajikistan and straight towards a warm showers host. A legend amongst the touring community who pass through central asia. She is called Vero and has hosted up to 20 people at a time! 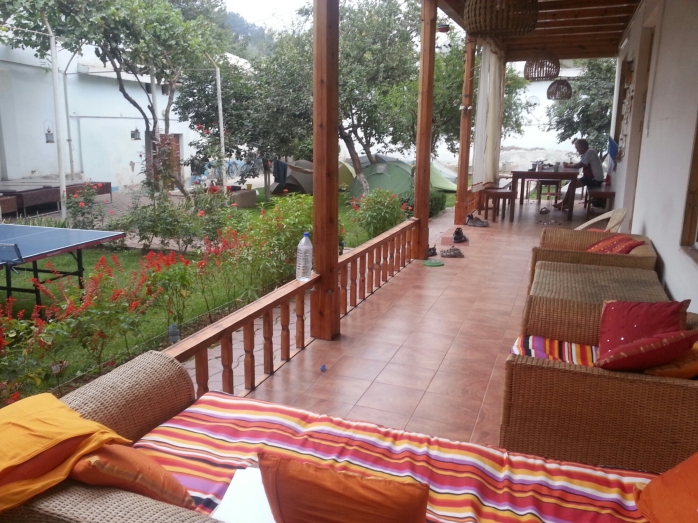 We will now relax here for a few days and then tackle the mighty Pamir Highway.
This is, for me, the most exciting and anticipated sector of the entire trip. I can’t wait!!!!

Next entry I hope to be in about 1 month.